Declaring April the 4th as International Day of Mine Awareness and providing assistance in mine action activities in all countries faced with this problem, in 2005 the UN General Assembly emphasized its strong commitment to accelerate the continued support and to find the best solutions in order to end this longstanding problem which has affected over 60 countries worldwide. 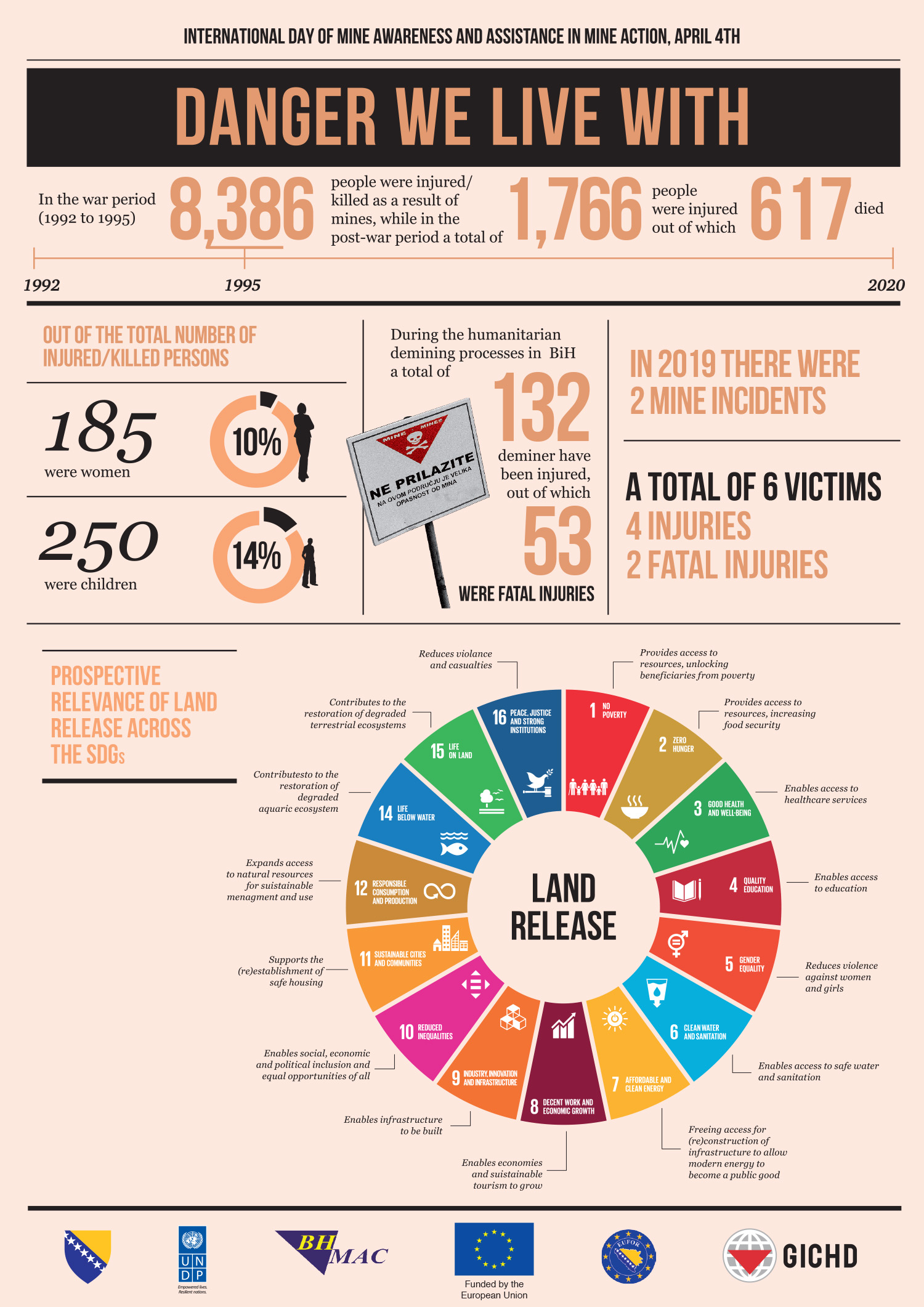 In the light of the unfortunate events caused by COVID-19 corona virus and the threat it poses to our country, Bosnia and Herzegovina Mine Action Centre today wants to once again remind all citizens of our country to be aware of the still-present explosive ordnance left behind from previous war events and to urge the entire population to strictly adhere to mine warning signs, especially since most mine accidents occur in early spring.

The fact that our country is one of the most endangered in the world, when it comes to explosive devices, tells us that our citizens must be warned about their consequences. Since most people due to the current restriction of movement and despite the strict warnings to stay home, still go into nature, it is very important to warn them about the existence of these kinds of dangers and to avoid the unknown areas.

In Bosnia and Herzegovina all necessary and available actions are being taken to protect endangered civilians and to remove explosive ordnance efficiently. These devices do not select their victims and it is very important to adequately take care of all survivors and families of mine victims with legal solutions enabling them to be included in social life and non-discrimination.

During the last five years, 158.5km2  was released and returned for use to the citizens where 8 992 mines and 9 992 residual explosive remnants of war were destroyed. The total number of landmine casualties is 1767, of which 617 were fatal. The danger that our country still struggles with, and how unstable and dangerous these devices are, shows the fact that two demining accidents occurred in the last year, in which two deminers were killed and four injured.

In the past 18 months, BiH Mine Action Centre in cooperation with the NGO Norwegian People's Aid and BiH Armed Forces, and with the financial support of the European Union (EU IcSP), worked on finalizing the project “General Assessment of Mine Suspected Areas in BiH”, confirming the overall mine suspected area of 965 km2, while over 480 field tasks have been adapted to the new Land release methodology, as a more efficient and effective approach to clear mine contamination in the coming period.

All data collected through this project serve as a basis for filing a BiH Request for Extension under the Ottawa Convention, signed in 1997 together with over 160 other countries affected by the same problem. According to the request, it is clearly specified that all remaining minefields should be cleared by 2025, as foreseen by the BiH Mine Action Strategy which was adopted by BiH Council of Ministers last year.

At the same time, and with the financial support by European Union (EU IcSP), United Nations Development Program (UNDP), in collaboration with BHMAC and Geneva International Centre for Humanitarian Demining (GICHD), works on development of a new information system (database) that will greatly improve, facilitate and accelerate clearance operations of mine suspected areas. Within the Project, a mobile application with mine suspected areas was also made, which will soon be available to all BiH citizens. This app will allow everyone to be aware of the dangers of landmines and it will increase safety of citizens.

Although we, as a state, strive to make the most of this process, we must express our gratitude to all donors who still do not forget the importance of mine action and we hope to continue this kind of support in the future.

It is important to state that all activities in the field in terms of conducting demining operations are currently suspended due to the new situation in the country and the world, which will certainly reflect on the realization of the annual operational goals.

We expect that a new Demining Commission will be formed as soon as possible, as a body with a number of responsibilities and competencies in this process, whose non-appointment  creates additional pressure and greatly impedes the tasks, and in part has led to the blocking of the demining process in previous months. Only good political will and effective coordination can lead to the adoption of amendments to the existing BiH Law on Demining and the achievement of adequate solutions for the final elimination of residual mine explosives, while BiH Mine Action Center will maximally engage all existing potentials in order to realize the planned field operations.

Bosnia and Herzegovina Mine Action Centre